Many of us who volunteer and use the Research Library at the Monroe County History Center treasure the many unique resources it holds. However, we often assume many of the published materials are simply duplicates of items held at the Monroe County Public Library or the IU Libraries. So, when I discovered a couple of rare maps while doing a routine inventory of the map collection, I was thrilled.

While working on a reference question over a year ago, while still the map librarian at IUB, I had searched for Peckham’s map entitled “Historic Indiana to 1875: County seats shown with date of platting, rather than date of founding, unless so indicated by ‘f'”, drawn by Ernest M. Jackson. The Indiana State Library appears to be the only other library holding the map so I had obtained a copy for my patron from them, but it is not the same as viewing and holding the original. Published in 1948 by the Indiana Historical Bureau, as the full title indicates, the map includes county seats, but also maps early railroads, and many historic events/places such as Maxwell’s Fort, General Morgan’s raid, and Wea Town. Most interesting, the map includes boundary lines for “Indian Treaties by Which Indiana Lands Were Opened to White Settlers”. 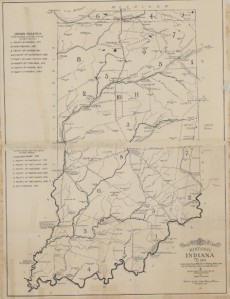 Peckham’s map at MCHC is two-sided, which I believe makes it truly unique. The reverse side is the same except someone (unknown) has drawn the “Underground Railroad Routes 1813-1865”. This second side is not indicated in the World Cat record for the Indiana State Library copy.

Except for John Wesley Powell’s map “Eighteenth Annual Report of the Bureau of American Ethnology to the Secretary of the Smithsonian Institution 1896-97” (4015 H.doc.736/3, map 45) I know of no other map that depicts the Indian Land Cessions so beautifully.