Ellettsville is no stranger to flooding.  When one of the heaviest rains ever experienced in the area fell in late November 1883, it nearly cost a few of the people in Ellettsville their life.  An account of the event, as noted below, was published in the Bloomington (IN) Progress on November 28, 1883. 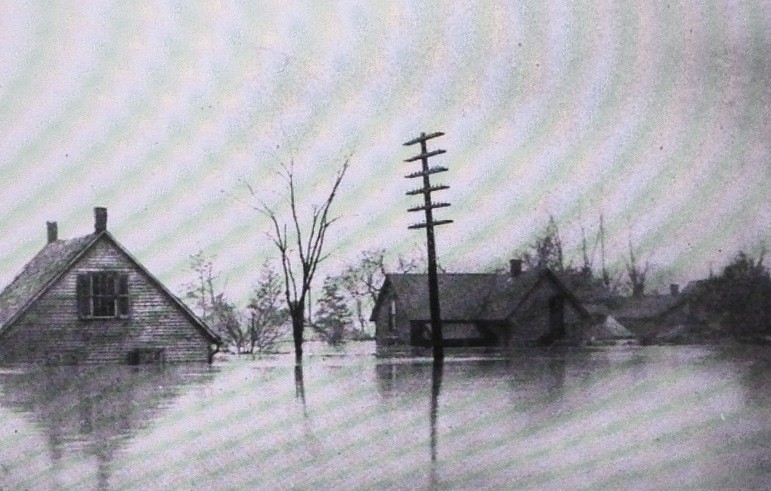 On Wednesday rain fell almost incessantly, and Jack’s Defeat was on considerable of a “bender” all day.  At five o’clock the rain came down in torrents and by six thirty the creek succeeded in getting higher than since the great flood of ’65.

The water rushed through Vine Street nearly reaching the Reeves corner.  All the houses on the lower end of this street were flooded, and there was considerable excitement over getting out the occupants of these houses.  W. M. Gillaspy, Jim Harris, Sandy Prow, Luke Gillaspy, Artie Miller, Charles Stimson, Rev. W. H. Jackson, Ed Mobley, Silas Jackson and others constituted a “life-saving crew” and waded waist deep to the house of John Hall at the foot of the street and carried out the women who were in the house.

Then the houses occupied by Bart Ellett, Marion Taylor, the old Edwards homestead, Henry Williams, T. E. Phillips, Jack May and Jerome Jackson were visited and carpets taken up and the women and children carried to safe quarters.  The water was over two feet deep in the Edwards house.  It was feared that John Hall’s horses and hogs, and James Whitsell’s cow would be drowned, but they were not.

This morning that end of town presents a dismal appearance there being much drift in the streets and several yards wholly without fencing.  Considerable lumber was washed away from the saw mill, most of which found lodgment on the flooded street.  Farther down in town considerable damage was done.

The water was 15 inches deep in the livery stable.  The platform was washed away and the stone fence north of the stable was leveled to the ground.  One wagon was carried off and other damage done.  The water lacked only an inch of running into the storeroom of F. E. Worley.  The water reached a depth of two inches in the west room of the Richland Mills, doing some damage to the wheat, etc.  Much fencing all along the stream was washed out, and the corn in the Sharp bottom, and bottoms father north, is very much damaged, and much of it was carried away.

The oldest inhabitant says he never saw it rain harder than it did from 5 to 6 PM.  Those taken from their houses found lodging among our citizens, W. H. Jackson caring for several of them.