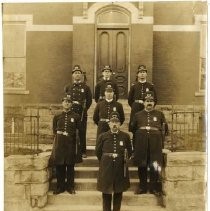 George McQueen “Shorty” Owen (variously spelled Owens) was a tubby individual with a cold eye who feared nothing that walked on two legs.  He had several siblings including a sister, Lizzie, who had that same cold eye.  She was a teacher in the local schools for a number of years and had no trouble controlling the boys in her charge.

Shorty, a native of Indiana, was born about 1855 to William Dunn and Sarah Owen.  For many years he was one of the Showers factory boys but finally left his bench at the factory to go into politics and first ran for town marshal about 1887.

Back in those days, Saturdays was the weekly fighting holiday—a political rally or national holiday was a sort of field meet for fights.  Saturdays was Marshal Owen’s busy days.  A cry of “Fight, fight” would bring Shorty at a swift pace and within a few minutes he could be seen going down an alley to the jail with a struggling individual.  But it wasn’t often he had to use a club to get a man to jail.  He never used a “billy” unless the unlucky man was sober enough to put up a real right.

The fights were mere pastime for Shorty, a cop who had a policy of never arresting a drinking man if the man would go home.  Also, every Saturday Shorty conducted various farmers to their wagons and started them home.  He was a sort of majordomo of the week and drinking festivities.

There were enough saloons in Bloomington to accommodate all the local thirsty and all the thirsty visitors as well.  With liquor in them, the town men fought because of differences and the country boys fought for pure pleasure.

There were several country families that celebrated each visit to Bloomington with a glorious fight.  The fight always started in a saloon or in front of one, then it continued up an alley to the hitchrack and around the square or to a side street where the family team and wagon was waiting.  Arrived at the wagon, the fighting family made a valiant retreat out of town, well satisfied with the usual pleasure which a trip to town offered them.  There were two or three families of four or five brothers who never finished their Saturday in town without a fight.  It must have been against the generally accepted rules to use a gun for few of those fights resulted seriously.  Even the use of a pocket knife was not good form.

Once in a while a bad individual would come to town, announce that he was bad and that he was going to perform in a bad, bad way.  When Shorty arrived, he would walk up and take the gun away from the bad man then take him to jail or run him out of town.  Shorty was one of the most fearless individuals who ever walked the streets of Bloomington.

As the years passed, Shorty began to have more than a local name; his name was used by mothers in compelling the obedience of bad little boys.  In fact, so great was the fear of Shorty that bad little boys ran and hid when a rumor passed up the street that he was coming.  In spite of the bad name which the mamas of the village gave him to their children, Shorty was kind to all the kids.

After serving as town marshal for twelve years, Shorty finally fell a victim to politics and was defeated by Ed Johns.  He lived only about a year after leaving office, much of that time in failing health.  In late October 1900, he went to Nashville, Indiana, to take advantage of the mineral baths.  Upon his return home in early November, feeling no better or worse than usual, he sat down to breakfast one morning at the home he shared with his sister, Lizzie.  His head suddenly dropped forward and the dying man breathed his last.

At the time of his death Shorty was 43 years of age, lived with Lizzie at 504 N. Lincoln Street in Bloomington where the funeral was held, and never married.  Lizzie filled out the information for his death record.  No place of burial was noted.  In addition to Lizzie, he was survived by two brothers, Charles of Waynetown and William Dale Owen who served as Secretary of the State of Indiana from 1885 to 1891.