During the course of his six-year presidency he oversaw the university’s growth at the new campus in Dunn’s Woods, improved the university’s finances and public image, doubled the enrollment and increased the number of faculty.  Eventually Jordan Avenue, Jordan River, Jordan Field and Jordan Hall would be named in recognition of his many accomplishments.  What is lesser known is the role he played in the history of American eugenics.

Jordan, who graduated from Cornell University with a master’s degree in 1872, came to Indiana University in 1879 as a professor of zoology.  About that same time, Francis Galton was pioneering the principles of eugenics in England based, in part, upon the theories of his half cousin, Charles Darwin who published works about the survival of the fittest.  Not long afterward, Jordan became an advocate of eugenics.

Eugenics is a set of beliefs and practices that aim at improving the genetic quality of a population through selective breeding.  On the positive side, eugenics might include programs that encourage particularly “fit” individuals to reproduce.  On the negative side, eugenics has prompted marriage restrictions and forced sterilization of people deemed unfit for reproduction.  After becoming popular in the United States, eugenic programs also became popular in Germany where they evolved into a lethal solution under Hitler and the Nazi regime.

Although Jordan did not coin the term eugenics, he was among the first to call attention to it in the U. S. when he published The Blood of the Nation: A Study of the Decay of Races through the Survival of the Unfit in 1902.  By then he had become the founding president of Stanford University in Palo Alto, California, ranked as one of the world’s top universities, and an early leader of the U. S. eugenics movement.

In 1906, Jordan became chair of the eugenics section of the American Breeders Association, the first organization in the U. S. devoted entirely to eugenics.  A year later, in 1907, the first eugenics/sterilization law was passed in the U. S.  Hoosiers may be surprised to learn that it was in the state of Indiana and heavily influenced by Jordan’s authority.  That law was revised in 1927 and repealed in 1974 after more than 2,300 of the state’s most vulnerable citizens were involuntarily sterilized.

California became the third U. S. state to pass eugenics/sterilization legislation.  By 1921 that state accounted for nearly 80% of all forced sterilizations in the U. S. thanks in large measure to the prominence and organizational abilities of Jordan, who by then had been in California for more than two decades, and the resources of Ezra Gosney, an American philanthropist and eugenicist.

Gosney founded the Human Betterment Foundation (HBF) in 1928 in Pasadena, California, primarily to compile and distribute information about compulsory sterilization legislation in the U. S. for the purposes of eugenics.  Jordan, then chancellor of Stanford, was an initial member of the HBF’s board of trustees.  In 1935, the HBF took credit for inspiring the eugenics program in Germany.

Adolf Hitler was obsessive in his attempts to create a superior Aryan race through forced sterilization and ethnic cleansing.  From 1933-1945 the eugenics movement in Germany began the cleansing by deportation and ended with the horrific “final solution” and the elimination of some 6,000,000 Jews and other less desireables such as Gypsies and homosexuals in concentration camps and mass killing centers.

Once fairly mainstream, it was through the negative association with Hitler that the eugenics movement fell into disfavor during the second half of the twentieth century.  Support for eugenic theories plummeted.  Ultimately there were more than 65,000 forced sterilizations in 33 U. S. states.  The last forced sterilization in the U. S. was performed in Oregon in 1981. 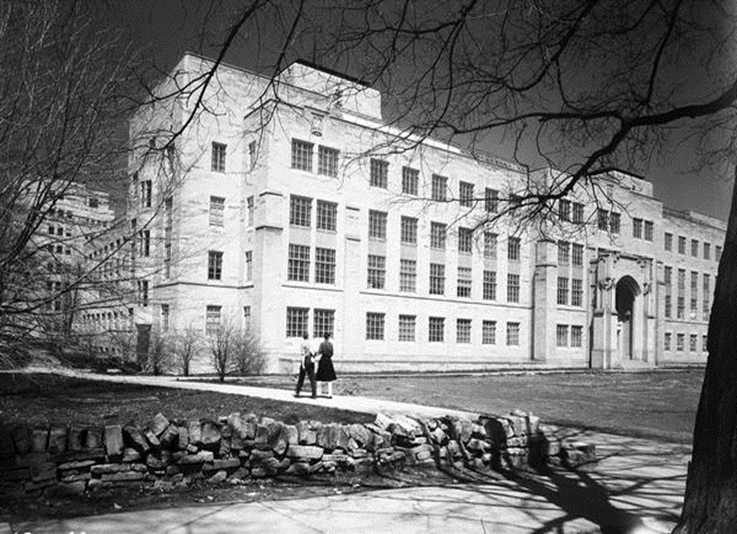 Jordan died at his Palo Alto home in 1931.  In 1937 a new Palo Alto middle school was named in his honor.  In 2015, a student’s book report about Jordan’s influence on the eugenic movement sparked an interest in renaming the school; in 2018 the name was changed in favor of Frank Greene, Jr., an African-American memory chip inventor.

In June 1956 Jordan Hall at IU-Bloomington was formally dedicated.  It houses the biology department and was named for the university’s past president who was also a foremost ichthyologist.  In the fall of 2017 the walls of Ballantine Hall were plastered with notes urging IU to rename the building in light of the leadership role Jordan played in the eugenics movement.  This was during the same time that the renaming of the Wildermuth Intermural Center was under consideration because Ora Wildermuth, for whom the building named, was identified as a racist.

Although the matter or renaming Jordan Hall came up again for discussion in the late fall of 2018, no action was taken and interest among the students and faculty seems minimal.  Could it be that too few people know Jordan’s history?   Or is it that they don’t care?