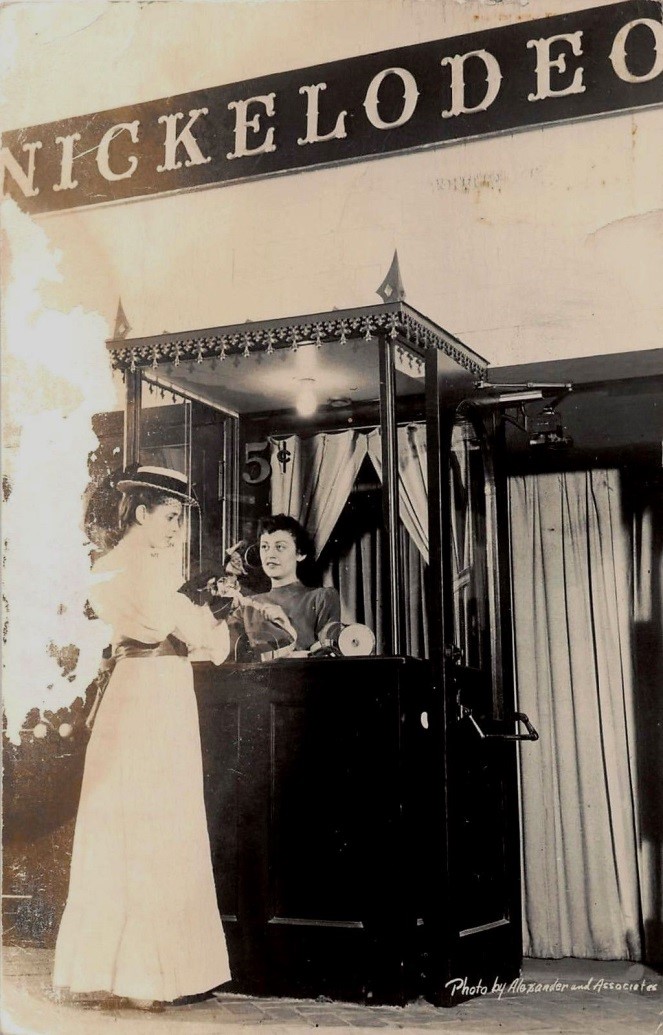 Ticket booth for nickelodeon at an unknown location.

According to a column titled “Looking Back on Old Bloomington,” written by Seymour E. Francis and published in the Bloomington Telephone on March 24, 1930, p. 4, Bloomington’s first moving picture show, a nickelodeon, was established in 1906.  That was just one year after the opening day of the world’s first nickelodeon in Pittsburg, Pennsylvania.

Arthur Bundy, whose family was living in Monroe County at the time, reportedly introduced the nickelodeon to a less than enthusiastic Bloomington crowd in a room located above the Monroe County Bank.  It is said that he advertised extensively in an effort to get people to risk a nickel to see what the movies were all about.  Some asked him what sort of a show he was operating.  Some thought it was a magic lantern affair like those of the stereopticons.  Others were more skeptical, they wondered if it would afford any entertainment at all.

Bundy returned to Bloomington in 1908 and opened the Family Park Theatre with seating for 500 on the corner of Fourth and Walnut streets.  The Family Park was the first open-air theatre in Bloomington.  A little later William Brissenden opened an airdome on Sixth Street seating 750 people.  Bigger yet was the open-air theatre opened by Nat Hill, Jr., Louie Howe and Jim Lefler/Leffler at the present site of the Monroe County Health Department.  That particular airdome had seating for 2,500.  Lida Robison Carmichael often improvised piano accompaniments to the silent movies.

Theatres today, more than a century later, are very different from the airdomes and theatres of the past.  And given the many different types of electronic devices a on which movies can now be viewed, it seems likely that the existing theatres will need to change or eventually fade into the past.

For more information about the early history of Bloomington theatres and the use of nickelodeons, check out the oral interview conducted with Robert Leffler in 1998.  Or read about the management of the Bloomington airdome in 1909.  And some of the movies scheduled to be shown in 1906 are mentioned at NewspaperArchive, a paid subscription website.