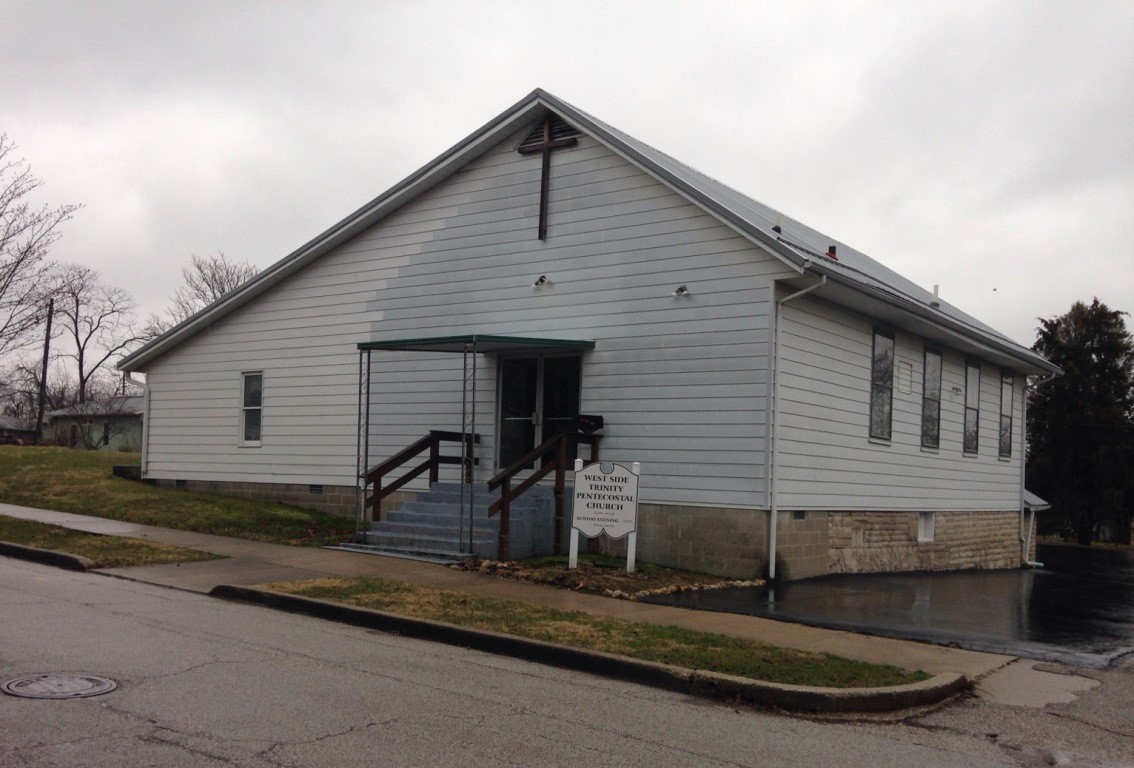 The Bloomington Seventh Day Adventist Church once stood where this church now stands at 915 W. Howe.  Look closely at the foundation, the cinder blocks at the front of the church look much newer than the rough stones at the rear.  Could these rough stones be the bones of the old church?

The Genealogy Library at the Monroe County History Center has a wonderful collection of files for the various churches in Monroe County.  Although the collection is quite comprehensive, there are several files that contain only a limited amount of information.  One of those files is for the Seventh Day Adventist Church at 301 Matlock Road where services have been held since 1957 or 1958.

Efforts made several years ago to obtain a history of the SDA church, and a list of its early members from the church office, were not successful.  Recently two rather lengthy articles related to the church’s history were discovered among items published in the Bloomington Herald Telephone and archived in the vertical files of the Monroe County Public Library.  The earliest item was dated 1968 and the later one in 1981.    Unfortunately, the two articles are not always in agreement with each other.

According to the 1968 article, there was a small group of SDA believers that settled in Smithville in 1871; according to the 1981 article, the beginning of Seventh Day Adventists in Monroe County was the organization of a church in Unionville in 1885.  Both articles reference the Young family and mention Chase Young specifically.  Chase was reportedly the last child born to Louis/Lewis Young (not mentioned by name in the 1981 article), a charter member of the church, who raised all of this children (either 10 or 20 depending on which article is most credible) in the religion.

In 1968 it was reported that a lady in Ohio received a copy of the SDA church magazine, Review and Herald.  She enjoyed it and sent it on to her unnamed brother, Louis Young, in Indiana.  He, in turn, read the magazine and in 1885 accepted Saturday as the Lord’s Day.  He was the first one in Monroe County to do so.  His son, Chase Young, was still a member of the church when he died in Bloomington in 1965.  (Efforts to corroborate that death with a death or burial record in Monroe County have not been successful.)

Both articles reported that Jacob Butcher on Moore’s Creek was an early convert to the religion.  According to the 1968 article, Jacob was riding along on his horse one day when a piece of paper began flapping against the horse’s leg.  He got off to remove the paper and discovered it was a page from the Review and Herald with an item about keeping the seventh day holy.  After a trip to Battle Creek, Michigan, the church headquarters at the time, to learn more about the SDA doctrine, Jacob and his family became Seventh Day Adventists along with the family of Joseph Wampler, also of Moore’s Creek.  These families from the Smithville area often traveled to Unionville to meet with the church established there.

The Bloomington Seventh Day Adventist Church was organized on November 18, 1916.  Soon afterward Louis M. Walsman was elected church elder and Walter V. Love the church deacon.  The first church building, according to the 1968 article, was a small house at 915 N. (sic) Howe purchased at an unspecified time by the membership and remodeled to suit their purpose.  According to the 1981 article, in 1926 the congregation purchased a lot at 915 W. Howe and constructed a new building first used on August 13, 1927.  The 1929-30 Bloomington City Directory indicates that the Seventh Day Adventist Church and school were, in fact, located on W. Howe and not N. Howe.

Max Taylor, a native of Monroe County born to Forest Edward and Bernice Doris (Kern) Taylor in 1928, grew up on West Second Street in Bloomington near the SDA Church and school on Howe.  Because his mother was a member of the church, he and his siblings attended the school from grades one through nine.  He recalled his memories of the school, located in the basement of the church, in his autobiography titled Many Lives, One Life Span.

In 1956, plans for the construction of the present church building on Matlock Road were initiated.  The church became a reality in February 1957 when the congregation held their first services in the new building, according to the 1968 article, or February 22, 1958, according to the 1981 article.  Since that time a church and church school have been operated continually at that location.

The conflicting history of the Adventist Church illustrates a problem that often confronts genealogists.  When sources don’t agree, what should one believe?  In this situation variations of the story are presented above as well they should be.  The reader is then free to choose one variation or the other or, more ideally do more research to determine the facts that are beyond the scope of this blog.