The story below was taken from an article titled “Double Murder, Terrible Shooting Affair,” published in the Bloomington Telephone on December 27, 1889, and found in the clipping file at the research library,  Monroe County History Center, Bloomington, Indiana.  It was abbreviated from the lengthy original as shown by the ellipsis.  Note that Elsworth “Elzie” Easton was the youngest son of William and Jennie Easton, hotel keepers.  At the time of his death he was about 25 years of age and worked as a stonecutter for Hoadley & Sons. 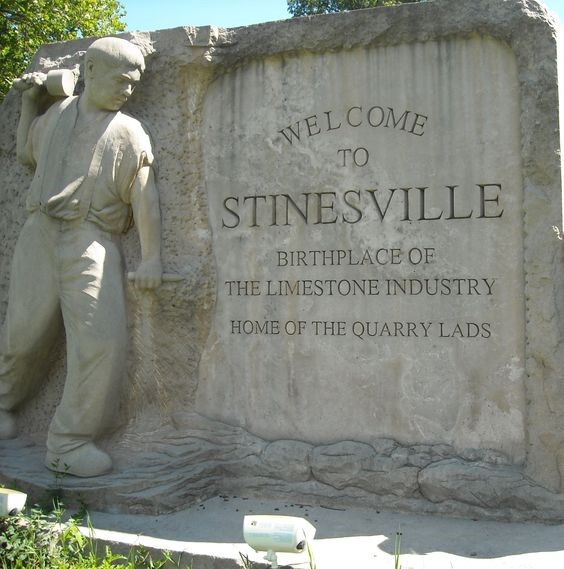 A terrible, double tragedy was enacted at Stinesville Christmas Eve.  Elzie Easton was instantly killed; James Douglas was mortally wounded.  A shotgun and whiskey in the hands of George Buskirk are responsible for the terrible crime.

Such are the facts, but the details are still more revolting.  There has, perhaps, not been a more desperate deed committed in the county for years.  It was between 6:30 and 7 PM in the evening, and the people of the quiet town—young and old—were hurrying by to the little church on the hill where was to be the annual Christmas tree…

Elzie Easton and James Douglas had been at Gosport during the afternoon and while there became more or less under the influence of liquor.  Shortly after 6 PM they boarded a work train and came down to their home at Stinesville.  Soon after arriving they went to the saloon of George Buskirk, a little frame building on the south side of the main street of the town…

While there Buskirk and Easton had some words though the quarrel was not of a very serious nature.  Anyhow, shortly after Easton and Douglas entered, the murder occurred.  Buskirk ordered [Easton] out of the saloon and when he refused to go, picked up a double-barreled shotgun that stood beside him behind the bar, deliberately aimed at Easton and fired.  Easton fell to the floor, instantly killed, the top of his head was blown off.

Three or four persons in the room ran out—all but Douglass.  As if terror stricken by the terrible sight before him, Buskirk turned to Douglass and ordered him to get out.  Douglass, starting to go, begging him not to shoot, but before he reached the door, Buskirk fired the shot taking effect in the left side and arm.  Douglass fell to the found and was soon carried away.

In the meantime, the murderer had gone.  As his last victim fell, he closed the rackety door behind him and, going out the back door, soon made his escape.   By this time the terrible news had spread…

At 9 PM Douglass was in care of Dr. Stansifer and resting easy when the reporter of the Telephone called.  He told the following story.  “The first of the whole matter, I went into the saloon of George Buskirk with Easton and was standing by the beer boxes.  Young Hargis was in there and started out pushing Easton to one side.  A few words passed between Easton and Buskirk; Easton wanted to fight and pulled a revolver from his pocket…Easton said he could whip Buskirk, Hargis or all of us.  I took Easton’s revolver away from him ten minutes before the shooting.  Buskirk knew Easton did not have the revolver when he was threatening to whip him just before the shooting. “

…How Milton Hargis saw it.  “I work in a stone quarry and live here.  I was in the saloon before Easton and Douglass came in…Buskirk spoke as Easton came in; told him twice to ‘get out.”  Easton said, ‘George, lay down the gun.’  George replied ‘get out’ again.  Easton ran his right hand in [his] pocket and told Buskirk, ‘If you don’t lay down that gun I will kill you.’  I looked around as George was bringing up the gun to shoot.   I started toward George; he said, ‘Take care,’ then shot at Easton.  As soon as he shot Easton fell, when Buskirk started out the back way.  I started out the front way at first shot; did not hear the second shot.  I heard all that was said up to first shot…”

Elzie Easton…when not drinking, was a very pleasant and honorable young man.  James Douglass, the other victim, does not bear such a good reputation.  He had been running a barber shop, and it is said he permitted gambling in the room.  He is about the same age, [25], as Easton.  George L. Buskirk, the murderer, is about 35 years old, has always been a hard character having been in one or two serious scrapes before.  About three months ago he opened a saloon in a little frame room and has since kept a very disreputable place as would be indicated by the terrible crimes that followed so soon.

Dr. Maxwell, Jr., the coroner, has not yet returned a verdict, but he states to the Telephone that he has heard enough evidence to justify the belief that Buskirk was not justifiable in the shooting of Easton and had no excuse whatever for attacking Douglas.

Coming next week:   George Buskirk Tried for the Murder of Elzie Easton