Hello! I am Hilary Fleck, the Collection Manager at the Monroe County History Center. I have the wonderful opportunity to research Monroe County women involved in the Women’s Suffrage Movement and the fight for the right to vote through funding from the Indiana Humanities’ May Wright Sewall Fellowship. My research so far has uncovered dozens of local women who organized, petitioned, and advocated for women’s right to vote at the local, state, and national level.  As part of a three-part series titled “Stories of Suffrage,” this blog post highlights the contributions of one local powerhouse, Mrs. Agnes Evans. I hope you’ll enjoy her story.

Agnes was not originally from Monroe County – she was born in Freemont, Illinois to Edward and Brigid Evans in 1882. She came to Bloomington through her marriage to Chester Evans, a local electrician, on August 22, 1911. She enrolled in Indiana University to study history, joined the Theta Phi Alpha sorority, and graduated with a Bachelor’s Degree in 1913. Census records do not show that after graduation Agnes held any sort of paid employment, however, the Evans continued to reside in Bloomington and her husband Chester worked the family business, Evans Electric Company, and by 1920 took full ownership of the business.

Shortly after graduation, Agnes took up active membership in the newly-formed Bloomington Franchise League (BFL). She was one of seven local women to attend the Mississippi Valley Suffrage Conference in Indianapolis on March 8th and 9th, 1915. The group listened to speeches about suffrage organization and political petitioning from leaders in the national suffrage movement, in addition to discussions on women’s suffrage around the world and the effects of the war. This small group of women came back to Bloomington ready to enact change.

The following month the BFL began to plan a suffrage education campaign during the summer and Agnes was chairman of the committee to distribute suffrage literature and speak around the county. The League designated May 1st as National Suffrage Day and planned a “suffrage melting pot” to raise funds and awareness for suffrage.

After giving birth to her daughter, Margaret Ann, in January 1917, Agnes then became President of the BFL when Mrs. James Woodburn was elected chairman of the Second District Franchise Leagues. She began to hold membership drives and public lectures to increase interest and participation in the suffrage movement. Although the Indiana State Supreme Court declared Indiana’s recent partial suffrage bill illegal, Agnes continued to encourage Hoosier women to educate themselves on the issues and the candidates so that they could prove women were just as competent in the political sphere as men.

In June of 1918 she was organizing chairman for a “suffrage school” in Merom, Ind. The school held classes on the legality of female suffrage, the national strategy, campaigning and canvassing, fundraising, and current state legislative issues. The Indiana school was one of many across the county designed to educate the next voting bloc in the country – and even offered childcare so young mothers could attend.

A year later, on June 4, 1919, the 19th Amendment to the Constitution passed through Congress and was sent to the States for Ratification. Indiana Governor Goodrich called a special session of the Indiana General Assembly and they ratified the amendment on January 16, 1920. Shortly thereafter, the Indiana chapter of the League of Women Voters formed and Agnes was elected as the 2nd Vice-President. During the early years of the League, she also served the organization as an Indiana State Representative and the District Chairman for Monroe County.

Agnes’s political involvement didn’t stop there. In 1920 she was elected as Vice-Chair of the Monroe County Democratic Committee; then in 1922, she was elected Chair, the first woman in the State of Indiana to hold such a position. An article in the The Indianapolis News indicates her male colleagues thought very highly of her and her political and organizational abilities. Agnes used her position to encourage other women to engage in politics. As the 1924 election approached, The Indianapolis Star reported that “Mrs. Chester Evans of Bloomington, Monroe County Chairman, is also making a campaign for women as candidates for office of precinct committeemen. Mrs. Evans reports that Monroe County is also planning to secure a fifty-fifty delegation of men and women to the Democratic state convention.”[1]

Agnes understood that to create lasting change, intentional decisions must be made at all levels of government. For women’s voices to be heard, they need a seat at the table. The rest of her life, Agnes worked to lead, encourage, and empower other women to use their right to participate in our government to benefit our community. 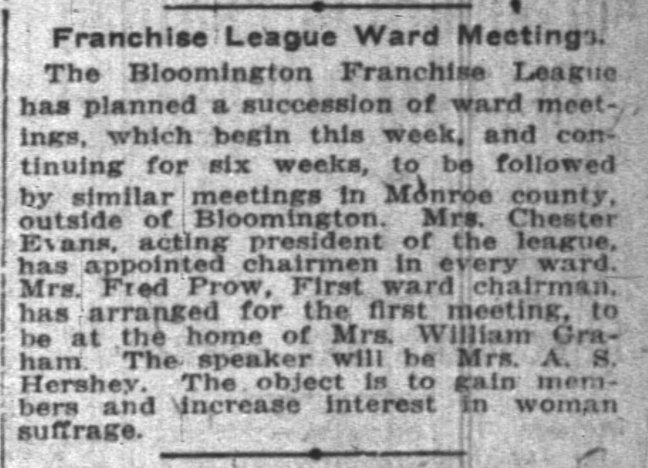 I hope you enjoyed as much as I did learning about Agnes’s suffrage activity uncovered by my research, funded by the May Wright Sewall Fellowship. I hope you’ll take the time to visit the “Votes for Women: the Women’s Suffrage Movement in Monroe County” exhibit at the Monroe County History Center, open through December 31, 2020 and free to the public.