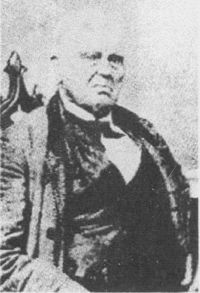 John Ketcham (1782-1865) settled in Monroe County in the spring of 1818.   At the time of his arrival he was already quite prominent.  Once situated in Monroe County, he remained a person of prominence.   Among other things, he built the county’s first water-powered grist mill, was commissioned to build Bloomington’s first permanent courthouse, served several terms as a Representative in the Indiana State Legislature and was one of first trustees of Indiana Seminary, later Indiana University.

Joseph and Ann are among the earliest burials in Ketcham Cemetery as noted at FindaGrave.   Joseph died in 1851; Ann in 1855.  When John’s son, George died in 1899, he was buried at Ketcham Cemetery which was described as “the family lot near the old homestead.”   It was described by Melcherd Kutch as the most enduring monument left in Monroe County by the Ketcham family.

Kutch reportedly visited the Ketcham cemetery only once.   That was about 1900.  He noted the cemetery was on a square plot, about 200 feet on each side, located on a wooded hillside on the west bank of Clear Creek surrounded by a stone wall “built of pick-up limestone rocks some two feet thick and four feet high.”  Briars and wild raspberry bushes trailed over the top of the wall in places.  Entrance was gained by “moveable bars” near the southwest corner of the plot.  Although Kutch used no words to suggest that the cemetery was less than desirable in any way, he ultimately reported that the physical surroundings were such “that man is not likely to find for it anything more suitable than a final resting place.”

At the time of Kutch’s visit to the cemetery, it belonged to Absalom “Ab” Ketcham, John and Elizabeth’s youngest son.  Ab lived on the old homestead after the death of his father.  In 1902, Ab sold a very large parcel of his land to Jess Stowell which included acreage in Section 6, Clear Creek Township excepting that portion of the northwest quarter of Section 6 “occupied and used as a graveyard.”

Sometime before his death in 1920, Ab placed $1,400 in a trust fund for the perpetual care of the cemetery.   Unfortunately, however, in 1906 Stowell closed up the roadway leading to the cemetery leaving it with no means of access.   Today the Ketcham Cemetery is on private property and managed by a private cemetery association.  A description of the cemetery location is available in A Summary of the Cemeteries in Monroe County, Indiana.