In 1869, Indiana law mandated education for colored children, with a separate enumeration and separate schools supported with tax revenue within the common school system.  In 1881 (1874?), Center School was converted to The Colored School to serve African-American elementary students of Bloomington. The school remained open until 1913.

At the end of the 18oo’s, it became apparent that Bloomington’s one-room library 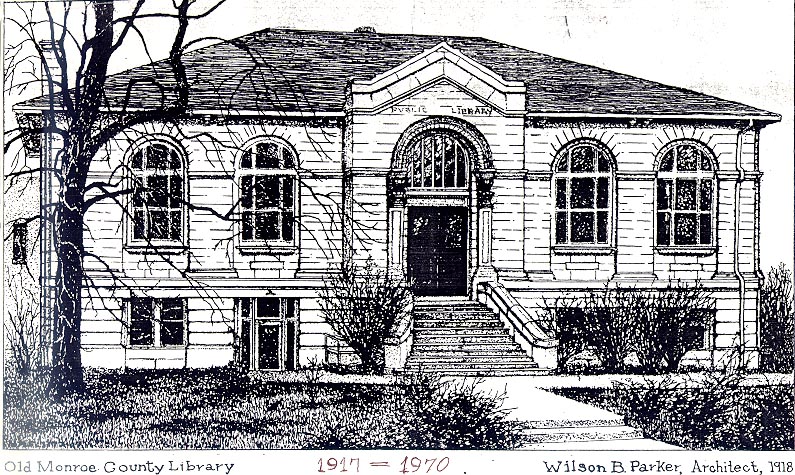 located inside the log courthouse was no longer sufficient. So in 1897, the Sorosis Club, a women’s civic club, attempted to obtain a grant for a building from Andrew Carnegie and included a question of accepting Carnegie’s offer in a local referendum. Unfortunately, the ballot contained additional community funding needs and was defeated. In 1915, the Sorosis Club again approached Carnegie and was offered $15,000 and then $20,000 in exchange for the customary conditions of the town providing a site and guaranteeing on-going maintenance of the facility. But the offer came at a time when the town was trying to construct a hospital and public support was overshadowed by the need for a health facility.

By 1917, the town’s situation had changed and for $21,000, the Library Board purchased the quarter-block that was formally the site of Central School. Intent on erecting an “architecturally” significant building, the Library Board elected to select an architect rather than hold a competition for one. While more than a dozen architect’s applied for the project, the board selected Wilson B. Parker of Indianapolis, a well known architect throughout the state and someone who had designed numerous libraries for the Carnegie Corporation. Carnegie offered a grant of $28,000, but the Board rejected it, asking for $40,000. The Carnegie Corporation was convinced to raise its grant to $31,000 and John M. Weaver of Indianapolis, who had recently completed Bloomington’s City Hall was selected as the contractor.

Parker’s design of the Neoclassical building incorporated ideals that Carnegie espoused including an auditorium for civic and cultural events with its own outside entrance so that it could be accessible after library hours. The massive fanlight, above the main entrance, was a semi-circle in deference to Carnegie’s request that his libraries have doorways surmounted by representations of a rising sun – a symbolic doorway to knowledge and enlightenment. The prominent doorway, accessed via a staircase, symbolized a person’s elevation by learning. entirely of large limestone blocks – a luxury which even in the day, was economically possible only for public buildings of the largest cities and mansions of the wealthy. Today, it stands as one of a handful of buildings in the community constructed of solid-block limestone rather than stone veneer.  When the library opened its doors in 1918, it had a collection of nearly 2,000 volumes and served over 400 city patrons.

In 1970, the building was retired as a library and in 1973 placed on the National Register of Historic Places. In 1974, the Bloomington City Redevelopment Commission acquired the structure and in the fall of 1977, a private donor made it possible for the acquisition and preservation of the building by Bloomington Restorations Inc.

Most of the early activities of the society have been lost by fire or their whereabouts unknown.  The society’s periods of inactivity and changes of venue undoubtedly contributed to the lack of coherent body of records, but over time, many were rediscovered and have made it possible to reconstruct some sense of the past.

The Monroe County Historical Society (Society) was founded on April 6, 1905 and held its first official meeting to elect officers in the lecture room of the First Christian Church. The Society’s first officers were Amzi Atwater, president; W.B. Seward, vice president; James A. Woodburn, Indiana University emeritus history professor, secretary; and Dudley F. Smith, treasurer. Members of the advisory committee were S.B. Harding, Indiana University professor, Minnie Ellis, Bloomington High School history teacher and Margaret McCalla. During that first meeting, President Atwater spoke on “The University of Forty Years Ago.” and from 1905-1908, some twenty-five additional papers were presented or announced on topics ranging from recollections of pioneer citizens to histories of local churches, the development of charities, industries and schools. It was the intention of the Society to preserve typewritten copies of all the papers read before the Society. Between the years of 1913 and 1948, interest in the Society waned, and records indicate it became inactive and went out of existence. In 1953, the Society came back for a short period and stayed intact long enough to introduce four new manuscripts that currently reside in the Lilly Library manuscript collection. Interest in the Society only stayed strong until 1955, at which point the first minute book ends.

On May 1, 1973, the current Monroe County Historical Society, Inc. was incorporated and registered with the State of Indiana, and was in need of a permanent home for its Genealogy Library. Then in 1978, the The Old Library, Inc. (TOLI), purchased the Carnegie site from the city of Bloomington and began renovations. The Society leased space from TOLI beginning in 1980 and in 1981 moved the Society’s Genealogy Library to the facility.

In 1994, TOLI dissolved and subsequently sold the building to the Monroe County Historical Society, Inc. for $1.00.  The Society soon looked to expand and after a successful Build History fundraising campaign, the Society added an additional 12,000 square feet to the old library building in 1997-1998.  The facility now boasts exhibit galleries of 8,000 square feet, an expanded genealogy and  local history research library, a museum store, and an education room.

In December 2002, the Monroe County Historical Society’ genealogy efforts received its own charter as an official chapter of the Indiana Genealogical Society and saw an immediate surge in growth and interest. The continued growth of the Society’s collections, library, and education holdings has made the museum and library a popular location for both residents and visitors. In 2018, the Society’s Board of Trustees officially adopted Monroe County History Center as it’s umbrella organizational name and features the museum, Genealogy Library and store all as elements of the Monroe County History Center’s vision and mission.