The clipping noted below, written by Mrs. Wesley Hayse, was published in an undated, unsourced Bloomington newspaper under a column called “Looking Back.”  It was found in a scrapbook compiled by a man named Fred Lockwood.  The scrapbook is held by the Monroe County History Center, Bloomington, Indiana.  The item below was abbreviated from the original, as noted by the ellipsis, and excludes information pertaining to the development of Polk Township.

Horse thieves, crooks of every kind, burglars and counterfeiters seemed to overrun Indiana in the late forties and early fifties, and Monroe County seemed to receive her share of the unwelcome visitors.  Within the county, where the rough country was scarcely inhabited, the ravines and thickets furnished excellent retreats for the outlaws.

The southeastern portion of Monroe County showed early evidence of illegal transactions of this character and several residents of Polk Township were at times suspected of complicity, but nothing definite was learned until late in the fifties.

Many men of good character, who had previously bore good reputations, were sometimes inducted to connect themselves with manufacturers of counterfeit bills or bogus coins in order to reap a harvest for the time being, intending to later resume their places of respect among their fellowmen.

Before this, counterfeit bills on different state banks and bad coin of fair appearance, color and weight had made its appearance in the county at stores, and steps had been taken to find the guilty person or persons, but the rascals had a well-organized system and soon baffled the authorities.  It was no doubt but more of this money was actually manufactured within the county as passers of counterfeit money were quite numerous. 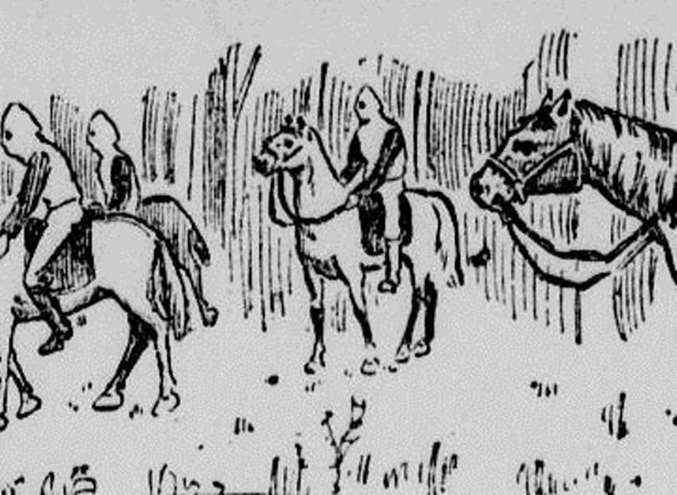 But finally conditions became so bad that an organization known as the Regulators, men of honesty in Monroe County and vicinity, resolved to, by their own efforts, end the career of the lawbreakers if careful vigilance and persistent effort could possibly bring such things to pass.  And these men did succeed and the plan soon became quite popular as the means of settling with criminals.

One man was shot in the jail in Bloomington by a mysterious crowd of men who overpowered the guards.

In a short time the plan meant grave abuses when a number of men held a grudge against a neighbor they would assemble at night, thoroughly disguised, and give the man a terrible whipping.  A man named Bingham received such severe treatment in this way that his body was a mass of bruised and blackened flesh from the whipping he received.  He died from the wounds within a few days, and he was said to be an honest, upright citizen.