An interesting, life-size sculpture at the Interpretive Center.

On a chilly Wednesday, November 14, enthusiastic travelers boarded a bus at 9 AM in front of the Monroe County History Center (MCHC) for an all-inclusive, day trip to Fountain City to visit several structures associated with Indiana’s Underground Railroad.  One of those structures was the Levi Coffin House Interpretive Center featured in the Smithsonian Magazine as one of twelve new museums around the world to visit in 2016.

Our first stop was for lunch at the Old Richmond Inn just a few miles south of Fountain City.  Our group was seated in a private dining room where steaming silver trays of food and a carving station awaited us in great abundance.  The food was every bit as delicious as it looked and smelled which prompted a fair number of us to anticipate an equally great dessert.  Alas there was none.

Our next stop was the Interpretive Center, a 3-story facility that opened in December 2016 with a number of interactive exhibits, a large gift shop that offered for sale abridged versions of Levi Coffin’s historic autobiography,  and an education room where we saw two short videos related to the underground railroad.  One of the videos featured a woman whose slave ancestor wore the wooden, Dutch-like shoes on display in the upper level of the Center.  On the sole of one of uncomfortable-looking shoes was a large, worn hole.  Where had those shoes traveled and what hardships had they known on their path to freedom? I wondered.

Thoughtfully, the Interpretative Center was located just across the street from the Coffin house.  Coffin, a Quaker merchant, had the house built for his family in 1839.  Although he owned the property until 1860, he left Fountain City, then called Newport, in 1847 and never again lived there.

During the course of Coffin’s residency in Fountain City, it is said that he aided 2,000 fugitive slaves in their escape to freedom.  On the uppermost floor of the three-story, brick home, accessed by narrow stairways, were places where the fugitives could be hidden in the eaves.  Fortunately, however, and due in large part to Levi’s legal savvy, the home was never searched.  After Levi’s relocation in Cincinnati, he continued to aid slaves and is believed to have assisted a grand total of 3,300 by his own estimate.  For this reason he is often recognized as the president of the Underground Railroad.

The Levi Coffin House was identified as an historic landmark in 1966.  Restoration, largely done with the help of the community, was completed in 1970.

The U. S. Department of the Interior placed the house on the National Registry of Historic Landmarks in 19666.  Restoration of the home began in 1967 and was completed in 1970.  Long-time owners of the home, who were aware of its history, kept it in good repair and preserved some of the home’s furnishings.   Today visitors to the home can see most of the original fireplaces, floors, doors and glass in the windows.  The furnishings all predate 1847 and are typical of the time period and those of a Quaker family. 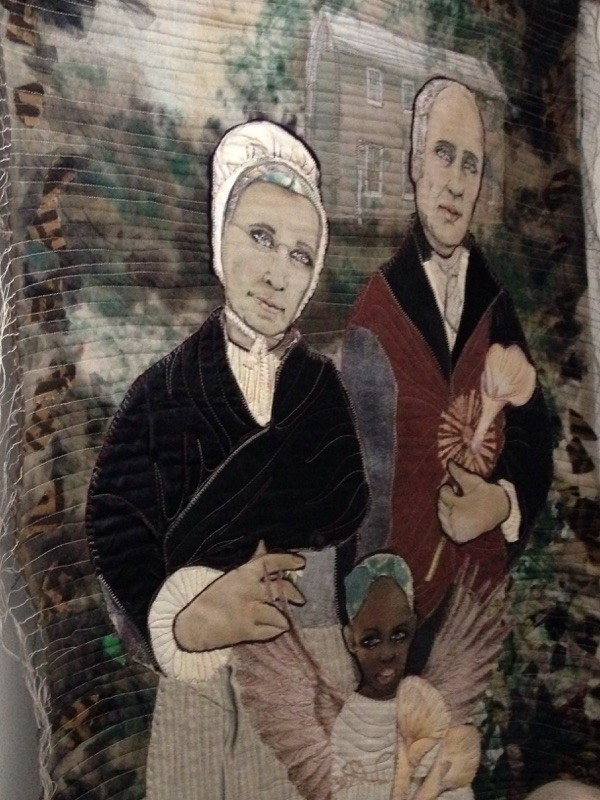 This lovely piece of textile art in the hallway of the Coffin home is one of its few contemporary furnishings.

Our last stop, a few blocks away via our warm bus, was a restored Friends Meetinghouse established in 1837.  It was here that Levi and his wife, Catherine, attended the Indiana Yearly Meeting of Anti-Slavery Friends along with other like-minded Quakers.  Details of the church are available in an online video and at Facebook as noted below.

If you missed this interesting trip, you may want to gather your family and visit these historic properties on you own.  And if you’d like to receive news of future trips, send an email to Andrea Hadsell, the MCHC educator, at education@monroehistory.org.    The MCHC would love to welcome you aboard on their next journey through history.  Membership is not required.

For more information check out these online resources: